Feb. 07 The Pain & The Process of Making Art no comments

Part of an artist’s life is rejection. Not everyone will love your work, no matter how wonderful your mother thinks it is. I’ve always known this, but somehow, when I decided to start submitting my work for possible publication in 2011, I was not prepared for rejection.

After all, my mother loves my work.

My husband loves my work.

My kids love my work.

My friends love my work.

So it came as something of a shock that my first ever piece of artwork submitted to a magazine for publication was REJECTED.

How could this be?

First, let’s consider the magazine. It was Somerset Studio, known for a crafty, shabby chic, cheery, scrapbooky type of look. Don’t get me wrong – I love this magazine, but clearly my work is a tad more – how shall I put this? – morose, dark, odd… I could go on but you get the idea. So probably my work was not a good fit for this magazine from the get go.

Second, let’s take a look at the challenge. It was called “A Hitchcock Halloween” and was described thusly:

“Alfred Hitchcock is a cultural icon, known for making films so scary that they keep people up at night, afraid to sleep. There are images from his famous movie The Birds that still haunt me. A master of suspense, he was able to evoke feelings of fear and anxiety in his viewers. For this yearâ€™s Halloween, weâ€™re asking you to channel the great Hitchcock. Be inspired by movies like Psycho, Vertigo, and Dial M for Murder. Create haunting, yet romantic, artwork reflective of his films. Send it in for consideration in our September/October 2011 issue.”

Well. One thing I absolutely knew with great certainty was that I DID NOT WANT to simply recreate a scene from a Hitchcock movie, or merely paste together random elements from the various films to form a sort of comprehensive collage, an ode to Hitchcock. Instead, I thought about one feeling, or one string of thought that seemed to unite or evoke the mood of his films. For me, that was an overall sense of eeriness, a spooky kind of what’s around that corner? feeling. Another common thread in his movies was the ever-present, good-looking blonde-in-danger. From Tippi Hedren in The Birds and Grace Kelly in The Rear Window to Janet Leigh in Psycho, there is always a girl, she’s always fragile, and she’s always in trouble.

I combined those two motifs in my artwork, which by now I am sure you are dying to see.

For me, this piece evokes the feelings of terror and anxiety for which Alfred Hitchcock movies are famous. I was inspired by his earliest black and white movies that seemed to heighten the tension by reducing the colors of the world to shadow and light, lending his work a haunting, eerie quality.

For me, the large, dark figure in my piece represents the lurking, brooding evil that haunts the imaginations of all humans, while the woman, seemingly unaware of her peril, is young, fresh, and innocent, further increasing the tension in the piece. The wings of the sinister creature recall the wings of the invading birds from the eponymous movie.

To make the piece I used wire to attach two corks to the lid of a purchased paper mÃ¢chÃ© box then ran additional wire through the upper body to form arms and wings. I attached a small Styrofoam ball to the top of the corks for a head and then covered the body and head with paper clay. I used torn newspaper strips with white glue and water to form draping wings and the suggestion of robes around the base of the figure. I covered the figure with a coat of gesso and several coats of black and gray paint, distressing it slightly for depth. The young woman was made from two balls of paper clay attached with a toothpick. Her legs are plastic electrical components I liberated from my stash of robot-making materials. Her dress is made from a bit of coffee filter paper and her hair is yarn. She is attached to the base with wire and glue. She holds a flower in her arms made from wire and rolled paper.

My efforts were unrewarded as my piece was not chosen for the magazine. Maybe it’s too abstract – the chosen art was much more representational. Or maybe the editors didn’t get the connection between my piece and Hitchcock. Or else they just thought it sucked. Maybe the fact that it arrived there broken had an impact (no pun intended). I’ll never know because I just got a nice form letter of rejection along with my returned artwork, no explanation.

Back in 2011, I was pretty upset by my failure. Since then, however, the clarity that comes with time has dulled the pain and made me realize that this piece does suck. I’ve come a long way in my art since then and have had a few successes. And no matter how bad this art is, I still had a wonderful time making it. And the most important takeaway from this experience was that I’m really proud of myself for having the guts to enter my first challenge.

By now you might be curious about the pieces that were selected for publication. Here are a few of them: 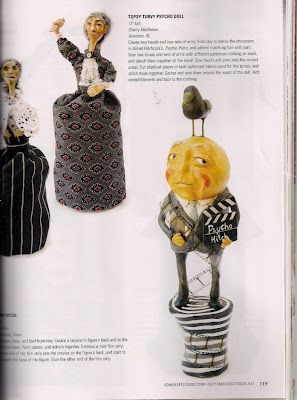 Table of Contents, Somerset Studio Magazine, some images of the Hitchcock Halloween challenge 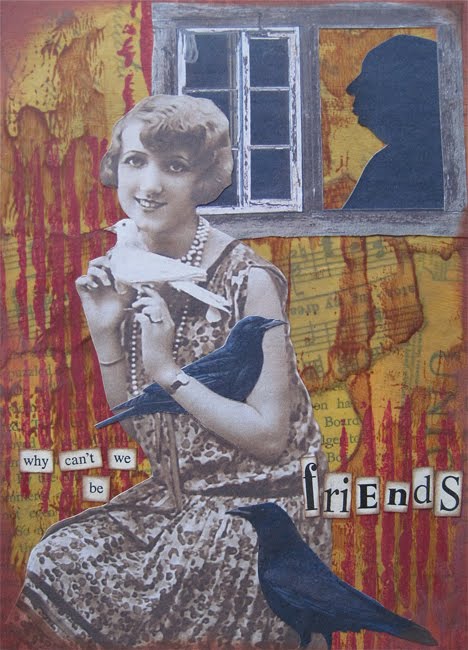 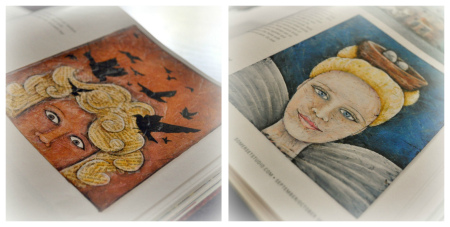 For the record, I have to say that I love all these pieces. They are all so much more interesting than mine. It makes me wonder what the other rejects looked like…

You can buy Somerset Studio magazine here. I have no doubt you will see my work in there some day!

How to Use Paint Pens